Although there are references to the `Water Dog` stretching back into antiquity the first detailed account of a barbet is to be found in Count George Louis Buffon's `Histoire Naturelle from around 1770. 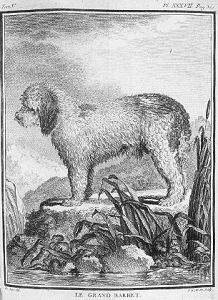 This type of dog was to be found across Europe albeit with minor local variations and in France it was primarily used as a retriever of game from the lakes and marshland which were common at the time, although it was also to be found fulfilling a variety of roles from pulling a milk cart to working as a sailors assistant . Its love of water of any temperature, willingness to work and devotion to its master, endeared it to the local huntsmen. However the same thick, curly coat which protected it from the elements soon gave it a permanent place in the French language Crotte comme un barbet, to be as muddy as a barbet. This type of dog was also common in the British Isles at the time, known as the `Great Rough Water Dog` although over time it was crossed with other breeds and eventually ceased to exist in its own right in the UK.

The barbet is mentioned in the formation of several breeds, most notably the poodle but also the bichon frise, the newfoundland, and the korthals griffon.

In France the breed suffered as the old marshlands were drained to make way for farmland and also from taller, more elegant barbet imported from Germany and further afield where it was 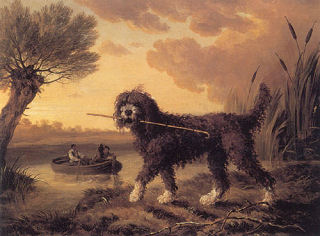 known as the Pudelhund (from where we get the name poodle). The two World Wars also caused a big decline in barbet numbers as they did with most other breeds.

In the 1970`s a small number of enthusiasts began bringing the barbet back to prominence fearing that this once common dog would disappear altogether. While still very low in numbers the breed is slowly gaining in popularity across mainland Europe, Scandinavia, north America and of course the UK.

A more detailed history of the breed can be found on the Barbet Club of Great Britain website and there is also an extensive bibliography on this website which gives a further insight.